I've been talking as much as possible about my miscarriage. For some reason, the talking helps me process what I'm feeling. It doesn't allow me to bottle things up, which I hear is good. I've been even more actively seeking support this week because the condom fiasco really threw me for a loop, knocked me back into the sludge I thought I'd begun to shake off. I have a history, one which includes some unhealthy behaviors, all of which stemmed from Trying To Do It Myself and Pretending Like I Don't Need Help. So this time, I'm not going to let myself fall into that. It's not fair to Gray, and it's not fair to myself, and it's really not fair to my hair, which underwent some frightening styles during my dark times.

So, Interwebnet, you are my free therapy (something you may have already noticed). I am shamelessly using you to make myself feel less alone. So YAY for you! I know you're super excited! You're like pro bono shrinks! Congratulations.
***
I talked to my sister's doula today. She was getting back to me with some support group information, and she confided that she, too, lost her first pregnancy at 12 weeks. A remarkably similar situation, one I'm finding is way too fucking common. She told me what helped her the most was making a journal which listed all the feelings she had before the miscarriage, and all of those she had afterwards. She included photos of herself during her pregnancy. She named her unborn baby and put that in the book.
I like this idea for a few reasons. It makes the loss more tangible. I never saw my child and I will never see my child. But I can name and own the feelings and daydreams I had about my child. Also, I like to write: good, bad or indifferent, I like to blather on and on about...well, everything. So this seems like a good fit for me. Lastly, this will give me something to go back to when I'm missing my child. Something akin to a baby book, albeit the world's most depressing baby book. Perhaps I'll call it a Fetus Book?
I think by now you know where this is going.
***
May I present to you: Gage's Fetus Book
We never knew if you were a boy or a girl, and we had planned to wait until you were born to find out. I was worried that if I made a prediction, that I might become attached to the idea, and possibly be disappointed when you were born. Neither Gray or I had a preference, so this fear was pretty ridiculous. But I never wanted to look back on the memory of your birthday and feel even the tiniest twinge of guilt for having wished you had a wee-wee instead of a who-haw, or visa versa. So we declined to participate in the raging gender debate. We chose names for both: as a girl, you would have been Veta. As a boy, Gage. My Jill, she was certain you were a girl. My grandmother (your grand daddy's mother), she was convinced you were a boy. Us? We didn't know. But now that you've died, I've come to think of you as my little boy. I don't know why. If you were a girl, I am SO SORRY, please don't be mad at mommy. 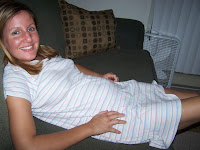 Here's me at 9 weeks.
A little silly to photograph what was primarily a methane bubble at this point, but I was just that excited. Plus, I mean...what if I waited to take the first baby belly picture, and then all of a sudden, I was out to ::here:: and there wasn't a "before" shot? Oh lord, the motherly shame. So I opted to take the cautious approach and just photograph every two weeks, starting at week 7.
I've wanted children for a long, long time. But my ex, he wasn't father material. So I waited. And then I fell in love with your daddy. And he was A+ father material, and he didn't run away screaming when I got drunk and told him I wanted children, like, two hours ago. He just said whenever I was ready, he was ready. Hmmm. Now that the ball was in my court, it was quite a different story. Was it too soon? Were we too poor? Was I too young? Should I finish school first? Gray would need a different vehicle for transporting spawn. I would need to quit smoking. Suddenly, the green light was a little scary. And so I waited again.
And then, this summer I went off the pill because it made my Crazy show. I was so much happier off the pill. I was going to get an IUD, but it was SO expensive and semi-permanent (as in, you don't put it in for 6 months and then change your mind, woman are you cracked? but if I did, it was reversible). I kind of started to freak out about should we? Should we not? Should we? Should we not? And then Gray and my Jill got together and talked and decided I was over thinking things and that my heart knew what I really wanted. And I listened. And they were right.
So we tried. Your daddy, he would prop pillows under my ass, and he would lay there and talk to me about hypothetical babies for the required 20 minutes of Encouraging Sperm to Stay In There and Impregnate Me. Or, at the very least, he'd plug in a movie for me to watch while I waited. I started the pregnancy website lurking, and the OMG are we going to CIRCUMCISE our BABY BOY? internal debate (note: don't watch a video of said activity on YouTube. trust me.) The where will we live, this apartment is too small!! fretting. The expensive peeing on sticks just to freak myself out process. Jill went on her, Oh for Christ's sake could you at least wait until after Rock the Dock? tirade.
And then, on our first morning of Rock the Dock, the same day my period was due, I woke up at the crack of dawn, ran into the bathroom with a pregnancy test, and burst into hysterical tears when I saw that, indeed, we had spawned. Gray was seriously confused as to why I was jumping on the bed and waking him up. He was even more confused by the "Congratulations Daddy" card, thinking I'd maybe jumped the gun a bit, and wasn't I supposed to wait until after I was pregnant to give him that kind of thing. Then I showed him the test, and all I remember is crying and hugging and crying and OMGing.
After that, everything was just kind of a wonderful dream. Until, of course, it wasn't. 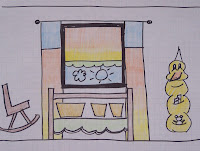 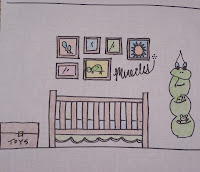 I fought The Tired and stayed up late, sketching what I imagined might be your nursery. I was going for gender neutral, but see how it kind of leaned towards "boy"? Yeah, I think I knew something, even then. We inquired about, and signed a lease for a bigger apartment in our building. One with room for a nursery. Since we can't paint the walls, I searched websites for wall decals and decided on these. They arrived in the mail the week after we lost you.
Gray and I texted each other baby names constantly. I quit smoking and gave up my wine, and we all know how hard that was for me. Except, it wasn't. Not even a little bit. We discussed whether we should tell everyone now, or wait the proper 3 months, until I was out of my first trimester. I decided that if something awful was to happen, if we were to lose you, I would want to talk about it, and that would be easier if everyone knew. How prophetic that was.
In an effort to increase my physical activity, I biked around town and ogled houses. I daydreamed about buying the homes I passed. I envisioned you walking in the yards, you daddy grilling dinner (aw, who am I kidding? I'm the griller round these parts.), your friends coming to ask if Gage could come out and play. I remember biking up a hill, by a school, and talking to you. I told you that you didn't have to worry. That never, in the history of parents and children, was a child more wanted than you. That you would never have to wonder if you were good enough or pretty enough or smart enough for us. We loved you so much already, more than I even thought possible.
We talked and laughed about the sleepless nights to come, the toddler antics, the projectile poops, your first smile, your first everything. One night, I paused the TV and said to Gray, "Just think: right now, everything about our child has already been decided - what color his hair will be, what his voice will sound like, his temperament, every physical characteristic. It's just...so amazing. I cannot WAIT to meet our child." And we marveled for a moment about how awesome our lives together would be, as a family. Gray said once, "Isn't it amazing how we, you and me, we made something...a whole person, with nothing but ourselves?"
Sure, there would be trials. There would be vomit and tears and "the talk". We discussed religion, and what we would teach our children about god. Gray believes, I don't. So we decided to teach our child a little about all kinds of faiths, and we would teach him to be tolerant of everyone's beliefs. When the day comes that he asks to go to church? We would take him. When he wants to visit his friends' churches? We would encourage him. When he asked about god and death? We would tell him all we could.
We discussed discipline, how each of us was raised and which practices we wanted to use with our own children. Gray talked about getting into shape so he could coach his kids' teams. He wanted to take FMLA leave so that he could stay home with you for a few months, just daddy and baby, and watch you grow (and probably call me frantically with poop situations).
I began blogging again because of my pregnancy. I say "again" with a chuckle, because my first attempt didn't last longer than 3 or 4 posts. But now, I wanted to record everything I was going through, so that I would remember, so that I could look back and marvel. I never expected that the things I wrote on this blog would include losing my first pregnancy. Nor, that my writing here would be like a salve on the wound, something that would let the pressure seep slowly out, something that would prevent an explosion.
When we lost you, I didn't know if I would ever blog again. But then I did, here and here and also here. I covered mostly everything that I needed to cover in those posts. Except to say that we love you and we miss you. Not a day will pass for the rest of our lives that we don't think about you, and the indescribable joy you brought us for those 11 weeks and 3 days.
I will never forget how I felt knowing I was your mommy.