Oh my god I am SO TIRED today, which sucks since we went to bed early in anticipation of driving all night long tonight. Wake up!! I need some coffee...

...ugh, work coffee sucks. But it warmed me up a bit, so there's that. Gray did get his hair cut last night, and it looks HOTT. I love the feeling of just-cut man hair, it's all fuzzy like a peach. He texted from the hair place to say that there was a guy stylist working and he was worried he'd end up having the guy cut his hair.

His exact words were, "There's a dude cutting hair here, too. Gawd I hope I don't get him! Blech!"

I wrote back to ask, "Why does that matter?" Oh no, he's a total homophobe. I never knew. What a jerk!

Next, "I got the guy! Fuck!" Clearly he was unhappy about the man stylist. I was curious to know more. I mean, Gray has gay friends, I have gay friends, it's never occurred to me before that he might have some kind of deeply rooted issue with rumpwranglers!

When he got home, I questioned him about it. Turns out he was worried about the head touching. He said that when a lady stylist does the job, they run their fingers through his hair over and over as the scissors or razor is lopping stuff off. He says it's relaxing (I'm guessing it's also a little stimulating, as in "totally acceptable infidelity" kind of stimulating).

I guess the thought of a man getting so up-close and intimate with his scalp made him concerned. He thinks he made the dude uncomfortable, possibly because of the shock/slash/revulsion on his face when he realized the dude was, in fact, cutting his hair. He said the stylist kept the chair turned at and angle to the mirror, so that he couldn't see what was going on, but had a direct line of sight to the TV. To me, that's excellent customer service - especially when working on a man, who would probably always prefer to be parked in front of the TV at any given moment.

The man stylist did not run his fingers through Gray's hair, but he did do a great job on the cut. Everybody wins! Unfortunately, it was not the normal, relaxing experience he was looking forward to. But if he truly liked it that much, he'd go more often. I'm just saying...

So I don't have any pictures of his new hair, but I do have some old ones, and they make a great (sexy) filler material. Behold: 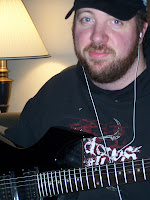 Just look at the magic hands. You know you're jealous. 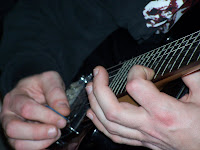 Last time we went on a trip out of town, I lugged our beta fish Blue (god rest his fishy soul) over to my friend's house so they could feed him while we were gone. I caught endless shit for this. Did you know they make little balls of fish food that, like, continually feed the fish? So you don't need a fish-sitter? I didn't either. But tonight, I've got to run to the pet store and grab some time-release fish food, change the water for little Buggy and Alice, fill my gas tank, wash my car, go to the liquor store (easier to bring it with us than to go across state lines to get it later), start loading the car with Christmas gifts and food, pack my own stuff, and possibly get in one last porn viewing session before heading to the land of the anti-porn.

Hope everyone has a great holiday! I know we will (read: hoping like hell we do).