I've had my laptop for an entire 26 hours now, and it's already heading to the Geek Squad for repair. Apparently Wal-Mart has a 15-day return policy on all computers (something they didn't mention at the time of the sale, because doesn't everyone read the back of their damn receipts?), and I think there was another stipulation about only accepting exchanges from leprechauns in blue, latex jumpsuits on the second Tuesday of every other leap year in HELL. Those bastards, I am seriously pissed off right now. Poor Gray got up before the sun to drive across the state to the one Wal-mart with the same model of laptop in stock, only to be told they will not exchange or return the laptop, and there may have been a "Neener, neener, neener" thrown in for good measure.

Everyone else I know with a PC laptop tells me they spend most of the time in the repair shop anyway, so I might as well get freaking used to it.

Otherwise, we had a splendid holiday with lots of coffee and kisses and family (i.e. total strangers to me) and food and gooshy stuff (you don't want to know). Gray woke up at 5:15 a.m. on Christmas morning and began the, "oh so subtle moving around and poking in order to wake up bed-mate without it being obvious that you're trying to wake up bed-mate" maneuvers. "Merry Christmas!", he said.

No way, no how, was I getting up at 5:15 on Christmas morning. SCREW THAT SHIT. So I forcibly kept him in bed until a much more decent 7:15 a.m. After that, I figured I was pushing my luck. He was all wired up like a kid, so we got up and opened our presents and had a grand old time.

Then we headed for (Timbuktu) St. Michael, to Gray's aunt and uncle's home, for a big turkey meal with all of his family (whom I've met twice). There were newborns. Two of them. 7 weeks old and 3 weeks old. I still can't believe I left without one of them hidden under my coat - those parents have no idea how lucky they are. Until Gray and I get married, those people aren't family, they're freaking strangers - lucky strangers who left with all of the children they started with.

On the way home, Gray turned and asked me, "So how are you doing? You haven't had any alcohol today..." To which I responded, "What the hell does that mean?"

Um. Well. To be honest, I'd prefer it if I were drunk right now, but all in all, I had a good time.

And now, a random photo of the Christmas Eve dinner I made for Gray and his mother. I'm posting this here because I spent a small fortune on the beef tenderloin. So much, in fact, that I'm considering having one slice framed to hang in the kitchen. Because it has to be made out of platinum or some shit. Seriously, no wonder I only make this meal once every two years. 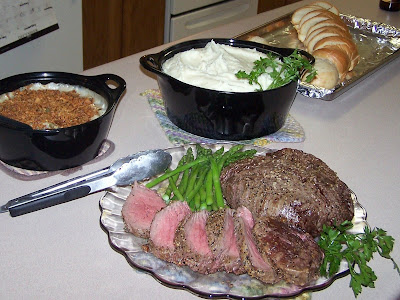 Hope everyone had a wonderful holiday, and I hope Wal-Mart burns in hell.