So my new psychiatrist wears Crocs. Blue ones.

I'm pretty sure that's an important detail, but I have yet to decide what that means.

It seems that many of my past mental health professionals rocked questionable footwear. I wonder if that's something they learn in Crazy School. It might be a way to distract the patient from their $200 an hour rate.

He also stands the entire session. Right next to a giant, comfortable, reclining lounge chair in faux suede. At first, I felt like it was an interrogation method designed to keep me talking, but then I realized he's not a therapist so the questions were more medical than psychological, so then I was just confused all together.Why wouldn't he want to recline? I wanted to recline. The couch was ok, but it was covered by a blanket the same way I cover my dog-eaten couches with blankets when company comes over.

Somewhere between asking about my erratic behavior and my hospitalization, he blurted that he suffers from chronic back pain which is triggered by sitting for long periods of time, which explained the standing thing but did NOT explain why he wasted money on a perfectly comfortable recliner if he was just going to pace around the whole hour.

I've found that shrinks prefer when I avoid personal questions about their footwear and their personal choices, so I just nodded my approval of his vertical lifestyle.

He declared that I've been misdiagnosed for years. Apparently I don't suffer from depression, which kind of explains why my antidepressants don't really work very well.

Instead, he believes I'm bipolar, and have been misdiagnosed in the past because my manic phases are very short compared to textbook bipolar patients. The treatment for bipolar disorder (also called manic depression) is an entirely different class of drugs which are considered mood stabilizers, and which are supposed to level out both the lows and the highs, versus just fighting against the lows.

This sometimes manic diagnosis might explain why I decided to rip of the bathroom floor tile in 2011 and, by the next day, decided that floor rugs would be a perfect substitution for actual flooring. Laying in bed and ordering Chinese delivery for six months seemed like a much better use of my time and resources.

He also gave me something for anxiety, but that seems only to make me sleepy like an antihistamine, so I'm not sure if that particular option is going to work out. I've got a med check coming up in three weeks, so we'll have to discuss other options (XANAX) at that time.

So things are looking up at the moment. Hopefully this means I'll soon be blogging about Happy Things and Funny Things instead of just Crazy Things.

For example, I saw a chicken at a garage sale. 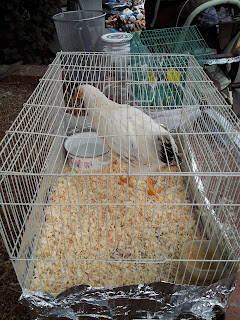